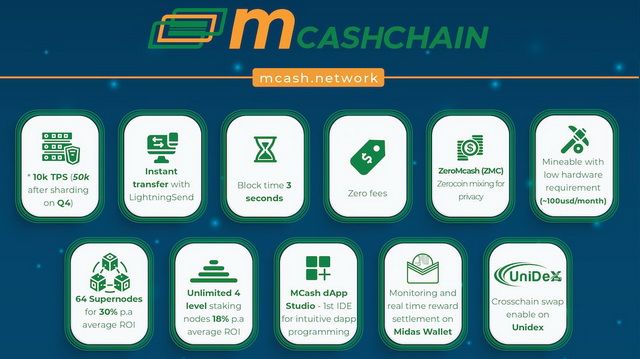 Mcashchain is a public blockchain designed with high scalability, high throughput, high speed transactions and zero fees for normal users. Mcashchain is secured, transparent and made for DApps development. It also allows users to earn passive income through 5 levels of voting nodes, run and monitored directly on Midas Wallet. One Supernode block generation level for expert users with mining hardware.

Zooming out, Mcashchain is part of a larger & dynamic ecosystem with key pillars including Centralized Exchange (Vinex.Network), Decentralized Exchange (UniDex.market), Universal Wallet (Midas Protocol), C-Commerce (Midashimaya.com), Stablecoin (TrueVND), Payment Gateway (McashPay) etc. The inherited synergy of a completed ecosystem from Midas.eco lays out a solid foundation and user base for Mcashchain to grow. 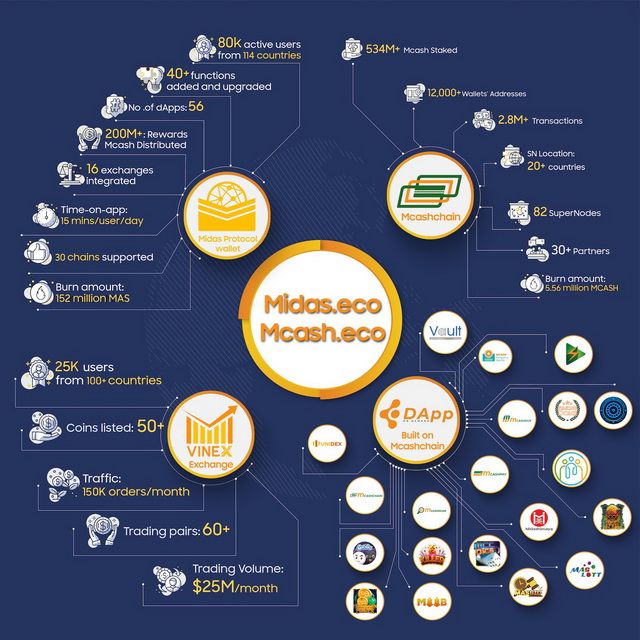 With dApp-on-Demand initiative, many development teams have come to Mcashchain to build their apps, contributing to a healthy growth roadmap of dApps & platforms on Mcashchain. Those include Tokoin, TreeChain Network, BigBom, Multicoin Gaming Center, Dragonsphere, TokenBot AI etc. Growing and maturing together with the market, Mcashchain has also started to adopt and develop many solutions for DeFi and Privacy such as McashBank (Lending, Exchange Traded Funds, Staking Pool), PawnHub (Decentralized Pawn Shop), ZMC (Zero Mcash) etc.

Mcashchain has a 3-layer architecture divided into Storage Layer, Core Layer, and Application Layer. The protocol adheres to Google Protobuf, which can be extended to support a new language easily via plugins. 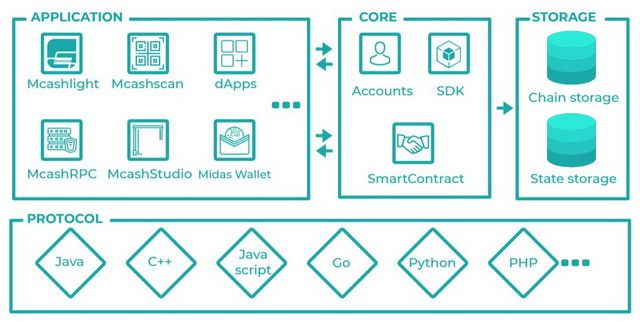 This core layer contains important factors to MCASH such as:

Consensus: MCASH uses the Proof of Stake (PoS) consensus with 64 Supernodes to maintain consensus and to generate blocks. Supernode Candidates (Masternodes) could be voted to become Supernode by 5 levels of Delegated Authority Voting (DAV) by individual voting nodes (Apprentice, Guardian, Warrior, Jedi and Master Nodes) with their corresponding voting power.

This is the layer where developers can build their dApps applications.

Find out more about products, applications by Mcashchain at: Mcash.eco

Mcashchain aims to become a public platform with the transaction fees as low as 0 for ordinary users and instant transaction speed, so as to become the blockchain platform that helps transactions that involve digital currencies be safer, more transparent and more convenient. With every necessary technology for a 2.0 blockchain, Mcashchain allows developers to build smart contracts and decentralized applications on its blockchain.

Mcash is the digital currency used within Mcashchain’s blockchain platform.

MCASH's Genesis Block has 900 million MCASH. The Mcashchain project did not do ICO, IEO nor any public fund raising. Instead, MCASH will be partly distributed to MAS (tokens of the Midas Protocol project) holders. These tokens are airdropped monthly. The last month will be january 2023.

Mcashchain launched its mainnet on 26 June 2019, and after 2 years, the reward for each block is 10 MCASH (which means there were 210 million more MCASH generated in the first 2 years).

The reward for each block in the 3rd and 4th years will be 6 MCASH (126 million more MCASH is generated in these years).

The reward for each block in the 5th and 6th year will be 4 MCASH (84 million more MCASH is generated in these years).

The reward for each block in the 7th and 8th year will be 2 MCASH (42 million more MCASH is generated in these years).

From the 9th year onwards, the reward for each block is kept fixed at 1 MCASH (which means 10 million more MCASH will be generated each year).

MCASH was created in order for normal users to transact coins/tokens on Mcashchain with zero fees. Those who have a large number of transactions will need to lock a certain amount of MCASH to boost their Energy and/or Bandwidth so that the transaction fee stays zero. If they do not lock MCASH to increase Energy and Bandwidth, the over-quota transaction will be charged and the fees will be burned to reduce the MCASH overall supply.

MCASH is used as rewards for supernodes contributing to block generation and maintaining consensus as well as rewards for stakers (5 levels of individual staking nodes).

MCASH can also be used to pay for goods, services provided by Mcashchain. For example, generating wallet addresses, creating smart contracts, issuing tokens, and setting up supernodes. The proceeds are burned right away to reduce the total supply:

How to mine MCASH:

Mcashchain follows the Proof of Stake và Delegate Authority Vodting ( PoS - DAV) consensus. Xnodes (voters), staking wallet addresses with at least 5,000 MCASH, can vote for 64 SuperNodes which will be used for generating new blocks. After every 3 seconds, Mcashchain will create one block and one reward which equals 10 MCASH for SuperNodes and Xnodes.

The risk for Supernode runners is less than compared to other PoS blockchains. Because when a Supernode candidate does not get in the top 64 due to lack of vote, it will fall back to be Masternode and still receive the Masternode rewards. It does not receive the Infrastructure reward that is only for Supernode level. For Xnodes, the staking amount is only locked for 3 days. After this, the amount can be instantly withdrawn back to the wallet. This makes it much more attractive to stake for a broader audience. Xnode stakers do not require complicated hardware setup like in the case of SuperNode.

Many other PoS Voting blockchains require stakers to use their native coins to vote in order to push a masternode candidate into the block generation level. That creates several problems: i) voting war between masternode candidates and masternode pushing the amount of staking, required for a candidate to become masternode too high, this pushes down the Return on Investment for stakers as the amount of reward is fixed; ii) the masternode that failed to stay on top will fall out, being idle, could not generate blocks hence having no reward at all. This is unfair for the masternode candidate because its owner has to put upfront investment into hardware requirements. In the case of Mcashchain, both of the highlighted problems have been fully resolved with the use of Delegated Authority Voting mechanism that does not require native coin but rather Xnode power, candidates when not being supernode still get the masternode reward and provide stable income for its owners.

According to recommendations from the developers team, users can store and complete transactions that involve MCASH as follows:

MCASH is currently available for on 5 exchanges:

In order to assess MCASH’s potential, we need to assess the products developed on Mcashchain, as well as the developers team’s strategies to raise the values of MCASH.

The Mcashchain team consider themselves as an essential part of the DeFi ecosystem and continue to offer new tools that enable everyone, including the very beginners, to benefit from DeFi tremendous potential. Mcashchain's DeFi hub - McashBank will provide various Defi, cross-chain protocols to help users to wrap one type of crypto on one chain to another chain in order to facilitate the utility of crypto in a multi ecosystems economy. Everyone can benefit from DeFi solutions from Mcashbank, either from Staking, Lending, Asset Management or Payments. Especially with Midas Touch — Midas wallet became the only universal crypto wallet that supports Top DeFi projects, dApps and more. 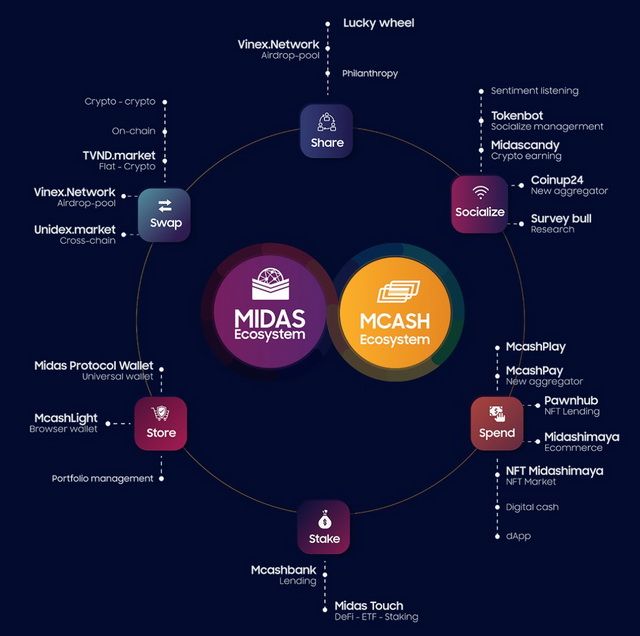 Reviews of dApp projects on Mcashchain

Cross-chain tokens creating projects on Mcashchain is one way to approach users of other chains. By creating cross-chain tokens, Mcashchain can attract those who are currently using other chains, and take advantage of Mcashchain’s properties such as zero transaction fees, lightning speed without conflicting with the token projects. A project can make use of the inherited lighting speed transaction and zero fees of Mcashchain blockchain without losing any inherited benefits of its token on other chains. For example, when TOKO joined hands with Mcashchain so as to issue TOKOM token on Mcashchain, TOKO owners can switch to use TOKOM while preserving all of their benefits. On top of that, users realize the acts of sending-receiving TOKO-M are performed more easily and faster, compared to TOKO ERC20.

Currently, there are many tokens that have issued their cross-chain token on Mcashchain

The number of dApps by Mcashchain:

At the moment, Mcashchain has over 14 dApps and developing projects on Mcashchain, of which many are potential, such as:

Though the number of dApps could be higher, these projects have all been invested in and are real businesses. Mcashchain has also won community voting as a next blockchain to get listed on dApp.com.

The project was introduced during the down-trend phase of the global crypto market and has not attracted enough attention it deserves. Yet, one important fact to note is that Mcashchain did not do any fundraising from the public hence the potential dump threat from ICO/IEO holders is zero. With only organic growth, Mcashchain now already has 13,000+ holders and a relatively small market cap around $2M. With the number of new projects migrating on Mcashchain continue to grow, the real demand of Mcash will increase as well. With the listing on Dapp.com and some major exchanges to push for more exposure, Mcashchain presents itself as a typical hidden coin to be watched in both short and long term.

Rate this article:
Please, sign in to perform this action