Easy for everyone involved and well worth going through

The customer service has been great, they always have an answer to my questions or concerns within minutes of me posting them! I wish that there was more than one language option available (German) as some customers prefer this over English when it comes time to pay via PayPal/Credit card etc. Also sometimes you are asked if your ready with payment before being moved onto next step which can be quite frustrating at times especially during busy periods like Christmas -.- But overall its very easy once set up correctly! Great system so far no complaints only minor things we ironed out ourselves but nothing major would recommend using their software without hesitation :) We use eurosend because our shipping prices vary greatly depending where goods come from hence why i am able sort by destination postcode /country then state & city to get best price range possible.전체 리뷰보기 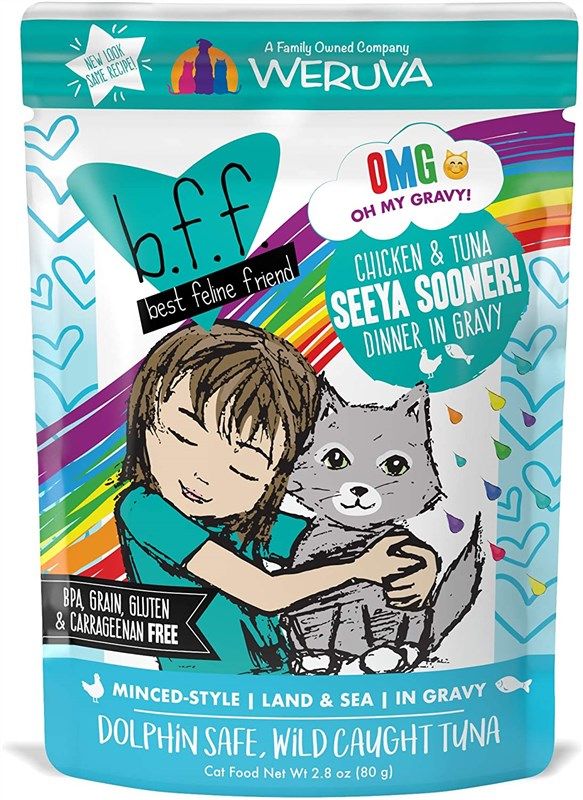 Finally he is happy!

i'll just cut and paste the same rating for both multipacks (i have both pot and rainbow and they alternate, eater didn't seem to notice any real difference) So that's the first one Cat Food Review I Really Love Writing! My boy Munchy will be 1 year old this month and so far has practically not been able to figure out what he is eating. not for kittens. Normal blue for kittens, no. Trying to get back to the desert, no. The kitten is thirsty, no. So I thought maybe it's time to try adult food. Again, there is no wildness in adult salmon. Well-being, no. Tiki cat, no. Same brand but no cats in the kitchen. He even stopped liking his treats as soon as I went from kitten to adult. It was terrible. One day I was looking for some kind of pouch at our local store (originally he loved candy so much he still responds to the word pouch by running tail-up in search of a treat) because he could hardly get enough of it wasn't eating wet food and just wasn't drinking plain water, so I started to worry. (Finally I found solid food for him and while I will always get it, I didn't want him to be on a diet consisting entirely of pieces). It caught my attention because it's cute. I really hoped the bag was $1.49 and he liked it. So far I've had no luck with anything other than pie, so I was just praying ground beef would be good too. I put it in his bowl and whoops! Path! I was surprised. Can't remember what flavor it was but I came back asap and got 5 more and they all disappeared! He's a little hesitant (I appreciate his sweet cheeks?) tuna and chicken, but it will eventually fade. I sincerely think he's fed up with the chicken since apparently it's all kitten food. When I found out he loves them, I bought several packs here, much cheaper, and he's finally happy. He alternates all the flavors, so I'm glad his diet is varied too. His fur is so damn soft now, it used to be soft, but now it's just amazing. So now he's officially getting a portion of that portion, split into two meals and a portion of thirst inside. Hope the fight is over! Not only was it disruptive, it was so expensive!전체 리뷰보기 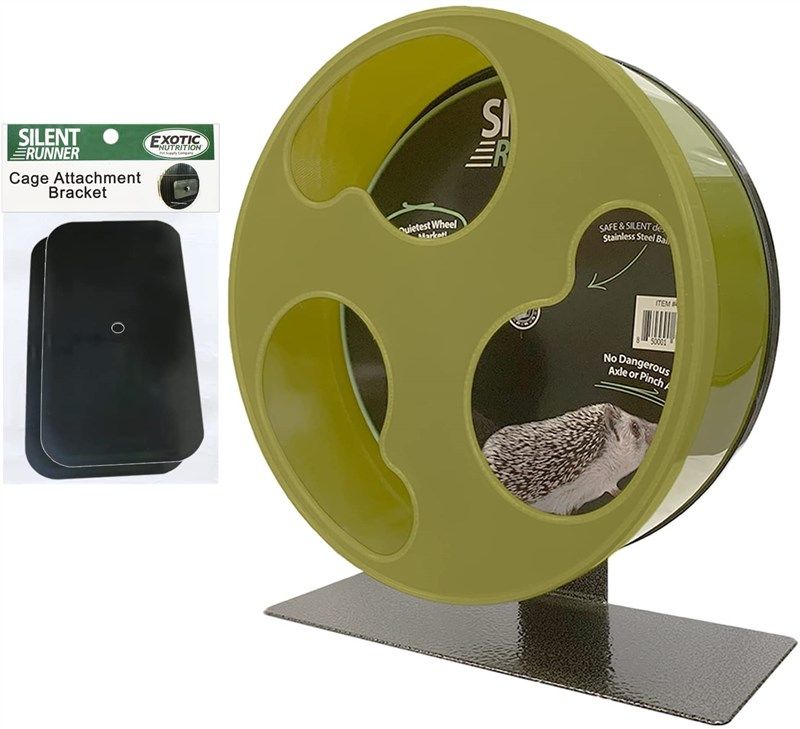 I have quite a large number of rats (adopted a woman who turned out to be a Trojan horse) so my equipment is used VERY often. I have both the Wodent Wheel and this Silent Runner. I've always had female rats so they could get by with a Wodent wheel that's an inch smaller and has a hub for the axle. When my "babies" grew up, I quickly realized they couldn't handle that size, so we bought an additional 12" wide Silent Runner. It really is almost silent as long as you hold it. In fact, that's all I hear Stamping tiny running feet which is oddly soothing, like listening to the rain It easily disassembles for washing by simply taking it apart and attaches directly to the cage bars I use vegetable oil on a paper towel to lubricate (non-toxic) I have a few Olympic runners and they'd be doomed without the wheel While both wheel brands are great, the Silent Runner wins with the open space otherwise occupied by an axle and a wide design.전체 리뷰보기 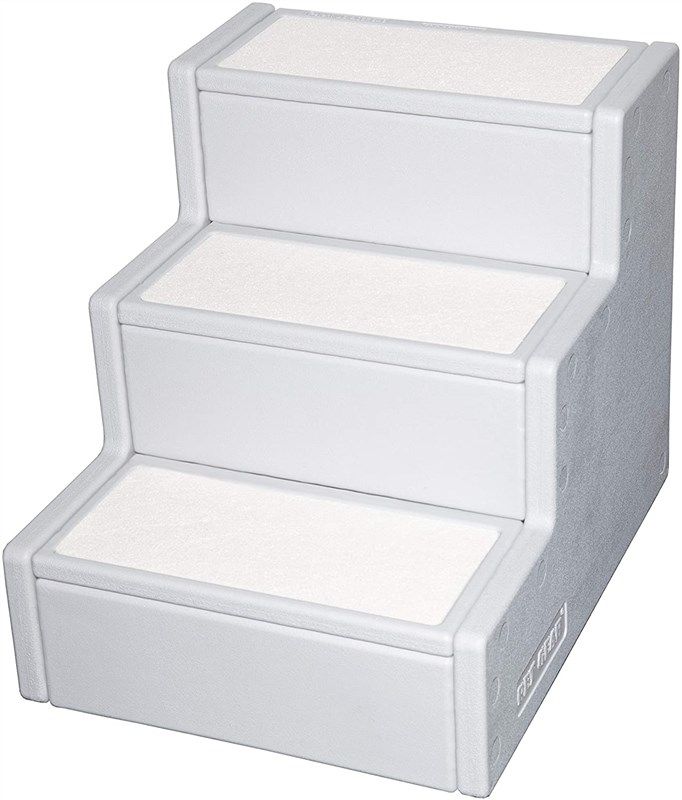 Perfect for an aging kitten

I bought these for an older obese cat with metabolic issues who was starting to limp. She likes to sleep on a shelf by the window, but she had trouble getting up there, especially when her leg bothered her. I was worried that one day she would hurt herself trying to jump on her from other furniture (I suspect she probably injured her leg doing this). These beloved steps arrived quickly and were very easy to assemble. I was a little worried about their durability at first as they seemed flimsy, but since they've been installed they don't seem to wobble or cause any problems when the cat uses them (and she uses them all the time now that she's getting used to them Has). She). She). The only thing I don't like is the look. The knots on the side are very noticeable when propped up and add to its cheap look. But then. They didn't cost that much, t. But functionally they are great and I am happy with this purchase as is the cat! I think that she will spend the last years of her life in great satisfaction that you will help her.전체 리뷰보기 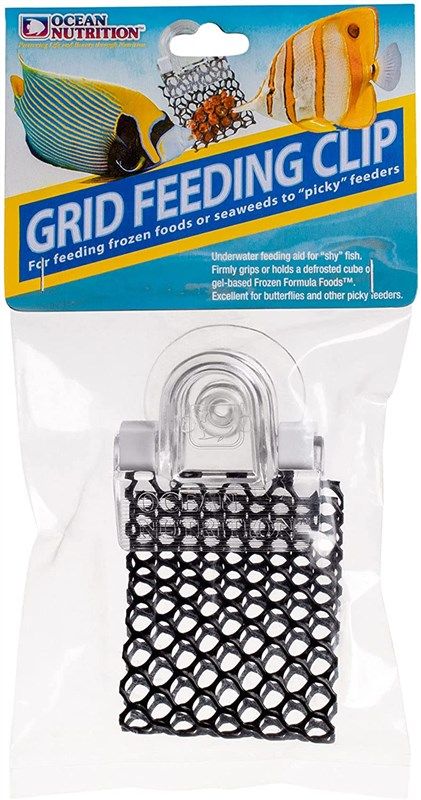 Okay, but the best products are out there.

This is a good feeding system but there are better products out there. I prefer Two Little Fishies products. To be honest you will probably get a better price by just buying a cheap feeder and then a replacement pack of Two Little Fishies feeders. I ended up using some spare zippers to cover the sides of the Ocean Nutrition mesh so the food wouldn't fall out once it bent. However, the suction cups on the Ocean Nutrition clamp are good. No complaints yet.전체 리뷰보기 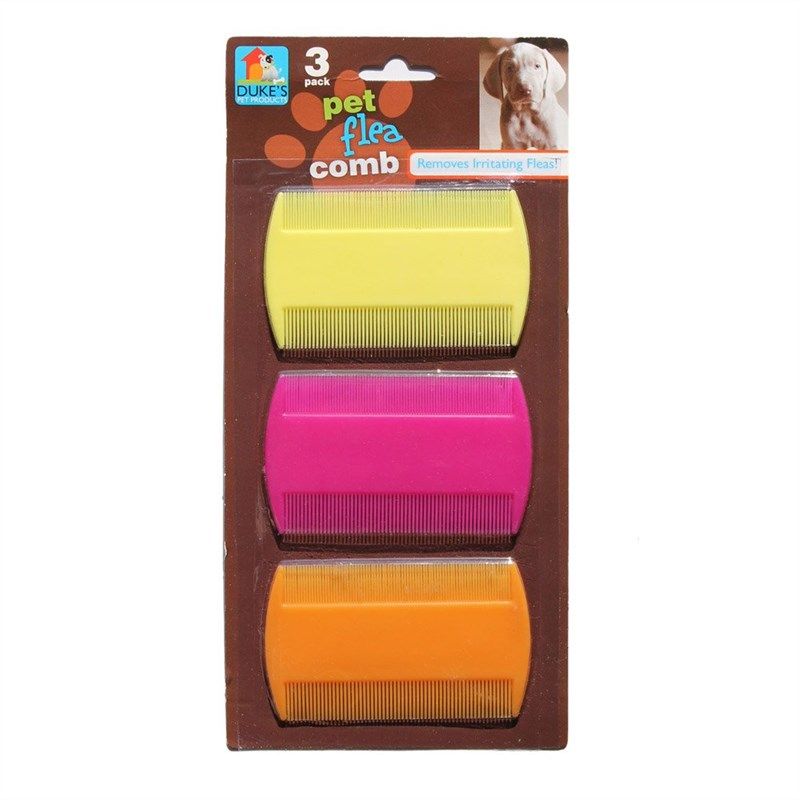 FINALLY HUMAN AND CAT ARE UNITED!

These flea combs work in our house. They're not terribly ugly, they're not overly sharp, and they're brightly colored, making them relatively easy to spot if you slip between sofa cushions, blankets, or toys. Also, they don't scratch or irritate Kitty's skin, but they seem perfect for a nice back scratch. Kitty also likes them because they aren't too big so she can play with them if she wants to. Some might not like it, but our house is ruled by cats, so we have no problem with that.전체 리뷰보기 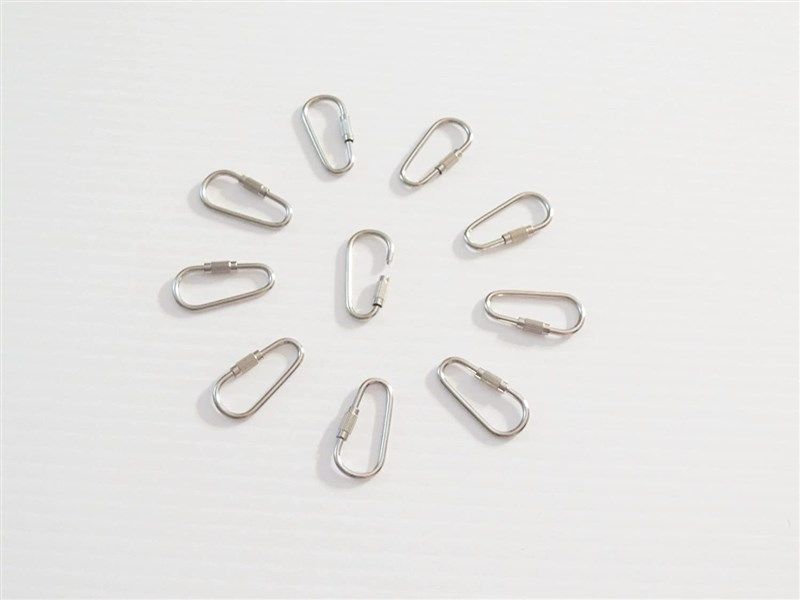 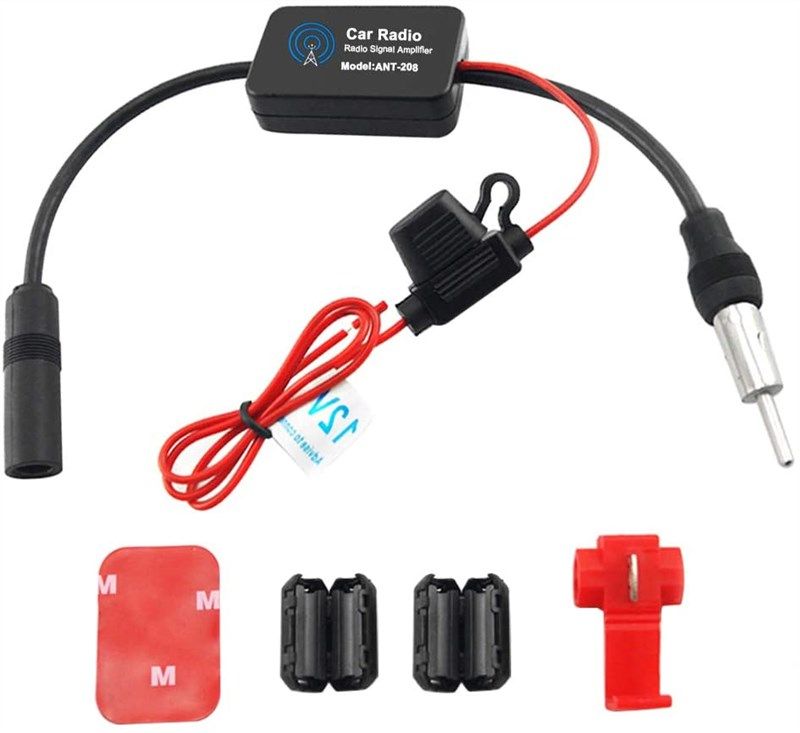 The red light came on.

Apparently the device has power, but nothing else happened. No noticeable boost, at least it interferes with the signal as the stations I've listened to tend to fade out where they used to be strong. Can't recommend it. waste of time.전체 리뷰보기 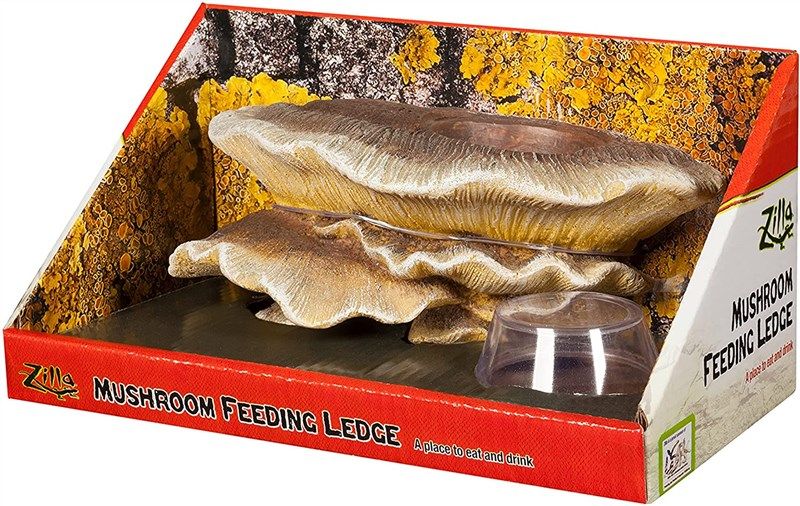 I recommend it! Love the look, no problem with the suction cup and its strength, everything about it is perfect for our new baby gargoyle gecko which only weighs 5 grams and is very small so he can't use the food bowl yet. I was about to add a new decorative piece to his tank and saw a piece was missing in the corner and I fumbled around to see if I could just leave it, but it's very sharp and there's another area underneath. it's the same as being very drastic and I don't want the guy to get hurt by it! It was packaged very well and I didn't pay attention to the edges when I installed it in the tank, but only now when I was about to put another vine in I saw that that sharp corner was missing! If it weren't for this issue I would give it 5 stars but I'm very frustrated by this as it can really hurt my baby gargoyle gecko's sensitive skin! I will contact someone on this topic! ***UPDATE*** I contacted Zilla and sent them all the details as well as pictures and they sent me a new mushroom bar so I'll be updating my review because I already love the product but the customer service is fantastic and I appreciate it that Zilla cares about the well-being of my pet and its products!전체 리뷰보기 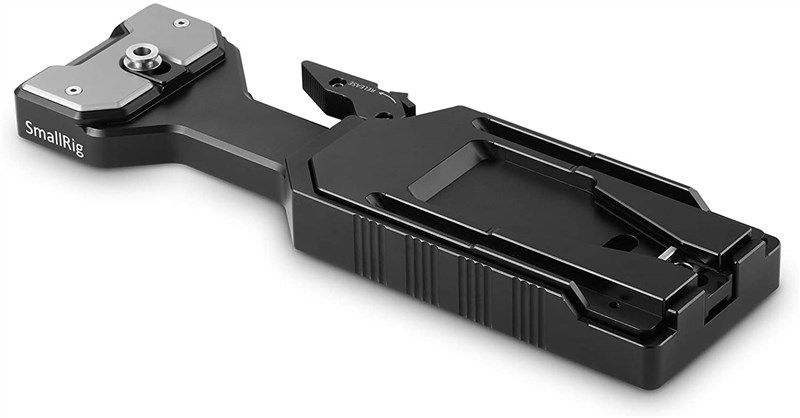 I bought it for the Sony F55. The attachment of the VCT-14 plate was very reliable, there was no backlash. I bought a small rig shoulder mount with a sliding baseplate and they work well together. It increases the center of gravity and I miss going through the support bars, but it's worth it in an ENG situation because of the quick-release feature. Feels solid and well made.전체 리뷰보기